The Irish Government should build closer ties with Taiwan, and support Taiwanese participation in international bodies, including the United Nations, according to Fine Gael youth wing, Young Fine Gael (YFG).

YFG has voiced its support for the U.S. Government’s recent push to allow Taiwan, formally known as the Republic of China, to be allowed participate in international institutions, particularly the UN.

YFG International-Secretary Eoin Scarlett stated, “The recent statement by U.S. Secretary of State Anthony Blinken urging the international community to allow Taiwan to participate in international institutions was a key milestone. It should encourage other democratic countries to follow suit.

“As Secretary Blinken acknowledged, it is important to remember that Taiwan held the Chinese UN seat as the Republic of China until 1971 when the communist regime of mainland China took its place.

“Allowing Taiwan to take part further in international bodies would further demonstrate the West’s strong support for Taiwanese self-determination in the face of increasing Chinese aggression. As a fellow small, liberal-democratic, island-nation, Ireland should seek to build closer ties with Taiwan and support it more on the global stage.

“Given China’s increasing authoritarianism at home and aggression abroad, YFG further calls on the Irish Government to work to build closer ties with Taiwan. This should include opening a diplomatic office in Taipei and setting up an IDA office in the country.

“It is time the Irish Government put our nation’s core values ahead of our economic self-interest in its policy towards the People’s Republic of China and Taiwan. Many of our close allies and partners, such as the United States, the UK, and Australia, are moving in this direction and we should follow their example”, Scarlett concluded.

YFG President Art O’Mahony commented, “Young Fine Gael proudly stands with the people of Taiwan, a fellow guardian of democracy, human rights and the rule of law, in the face of growing threats from the Chinese Communist Party.

“It is high time that Ireland supports democratic states under immense outside pressure like Taiwan, and stands unequivocally with the victims of Chinese aggression”, Mr O’Mahony concluded. 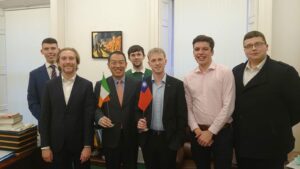