YFG publish policy paper on The Future of Irish-Chinese Relations

The Future of Irish-Chinese relations policy document is a result of months of work by the YFG International Committee. “From the start of the committee’s term, we wanted to work on detailed policy on what we all saw as the biggest long-term geopolitical challenge of our time: the rise of China as a global superpower, and its challenge to liberal democracy,” said Eoin Scarlett, International Secretary of Young Fine Gael.

“We began our work by meeting various experts on China from academia, politics, diplomacy, and journalism. To avoid compromising their impartiality we will not name those from outside politics who met with us, but we thank them very gratefully for giving us their time and providing fascinating insights.”

“We would like to thank Minister Simon Coveney, Senator Barry Ward, and Taiwanese Representative to Ireland, Pierre Yang for meeting with us and being generous with their time. We hosted a fascinating discussion with Senator Ward and Representative Yang during YFG’s Cosgrave Weekend event in Athlone earlier this year. This allowed us to engage with the wider YFG membership on this topic before beginning to write our document.” 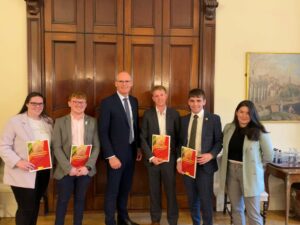 “The Russian invasion of Ukraine occured while we were in the middle of finalising the document. While the invasion profoundly shocked, angered and saddened all of us, it did not change our view that China, not Russia is the real primary long term challenger to the West. It also confirmed to us that the position we put forward in this policy paper is the correct one for Ireland, particularly on a moral level.” 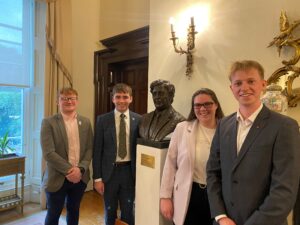 “I would like to thank the Committee for their excellent work. In particular, I would like to thank Áine Cooke. Áine’s detailed policy knowledge is unrivalled, and as our policy officer, she is responsible for putting together much of this document. Our thanks to the YFG National Executive for their constant support and facilitation of the design and printing of this document.”

“Finally, we hope both YFG members and the Fine Gael senior party will see this paper as an important statement on how YFG, and indeed we believe much of the youth of Ireland as a whole, would like to see Ireland’s policy position towards China develop.” Scarlett concluded.

Members of the International Committee and the YFG National Executive met with Minister Coveney to present the recommendations from this document to him. 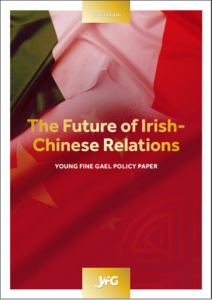 Read the policy document by clicking on the image above.